Have you heard of ginkgo biloba as a natural glaucoma treatment? Before we discuss ginkgo biloba, let's find out a bit more about glaucoma first.

What is glaucoma and why is it important?

Glaucoma is a condition where there is progressive damage to the optic nerve, usually related to high pressure in the eye. This causes visual field loss and if untreated, eventual blindness.

Glaucoma is the second commonest cause of blindness worldwide, and affects at least 2% of the population. More than 60 million people are affected globally. The scary thing is that most people do not notice any glaucoma symptoms until a lot of glaucoma damage has already occurred.

It is widely accepted that the retinal ganglion cells of the optic nerve become permanently and irreversibly damaged from glaucoma. It is this damage to the ganglion cells that eventually leads to blindness.

The conventional thinking is that any vision lost from the optic nerve damage cannot be recovered, hence the focus on monitoring and early glaucoma treatment. The idea to pick up early signs of glaucoma damage before any significant sight loss and glaucoma symptoms develop. 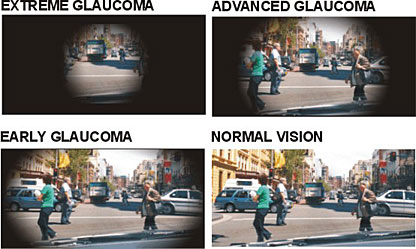 (Image adapted from the internet)


What is ginkgo biloba?

Ginkgo biloba is a popular natural herb that has been used for centuries in Traditional Chinese Medicine. It contains a complex mixture of at least 37 phytochemicals in 2 main groups: flavonoids (which have antioxidant properties) and terpenoids (which have blood thinning properties).

Standardized Ginkgo biloba extract (EGb 761) has been found to have properties that can be useful for the treatment of neurological and cardiovascular conditions.

The beneficial effects of ginkgo in glaucoma (particularly low pressure glaucoma) are likely due to a combination of its antioxidant and anti-inflammatory properties, as well as its ability to increase blood flow to the optic nerve and brain.

Interesting fact: Ginkgo biloba extract is made from leaves of the ginkgo tree, not the seeds. Ginkgo seeds contain ingredients that can be poisonous and cause serious side effects when eaten.

How does ginkgo biloba work as a natural glaucoma treatment?

Ginkgo biloba is one of the most studied supplements for glaucoma, with at least 4 randomized clinical trials.

Subsequent trials have also found improvement in blood microcirculation to the optic nerve and oxidative stress in the bloodstream. A trial published in 2017 found that a ginkgo biloba blend with other antioxidants and omega-3 fatty acids (Optic Nerve Formula) taken 2 capsules twice daily for 1 month, produced significant improvement in blood flow to the retina and optic nerve.

In this study, 42 patients were followed up over an average period of 12 years. The visual fields before and after gingko biloba usage were compared. While no improvement in visual fields was found or expected, progression of existing visual field damage slowed significantly.

Among all the glaucoma supplements, my opinion is that ginkgo biloba, along with citicoline, has shown the most promising and impressive results so far in terms of slowing down visual field loss.

READ NEXT:  Citicoline as a natural glaucoma treatment

Are there side effects and risks from ginkgo biloba?

In general, ginkgo biloba has a good safety profile and is well-tolerated.

Please use with caution if you are taking blood-thinning medications (such as aspirin and warfarin), or if you have a health condition that increases bleeding (such as chronic liver disease or low blood platelets).

Other potential side effects include nausea and diarrhea.

Ginkgo can also interact with prescription medicines. Some medicines that can interact with ginkgo include aspirin, clopidogrel, warfarin, trazodone, omeprazole, and some diabetes medications.

I have glaucoma. Should I take ginkgo biloba anyway?

I usually recommend it to patients whose glaucoma continues to deteriorate despite achieving low eye pressure with medical treatment at a dose of 120 mg daily.

In severe glaucoma, I will increase the dose to 160 mg daily.

The brand of ginkgo biloba is probably not that important, but please make sure you purchase from a reputable supplement manufacturer. Ginkgo biloba extract can be purchased in-store or online from Amazon and iHerb

If you wish to take ginkgo biloba as a natural glaucoma treatment to prevent and reduce your risk of glaucoma blindness, below are highly-rated and recommended supplements that are available for you to purchase through Amazon:

If you are considering ginkgo biloba as a natural glaucoma treatment, please make sure to discuss with your eye specialist and family doctor first to avoid adverse drug interactions and unwanted side effects.

Ginkgo biloba must not replace the glaucoma treatment that has already been prescribed by your eye specialist. Rather, it should be taken in addition to and complementary to your existing treatment.

Are there any other alternative natural remedies for glaucoma?

Yes! Ginkgo biloba is a great natural glaucoma treatment. However, not everyone can tolerate ginkgo biloba.

There are other widely available natural supplements that can be used to complement your existing glaucoma treatment.

It is worth repeating that if you are considering any of the natural glaucoma supplements and remedies, please make sure to discuss with your eye specialist and family doctor first to avoid adverse drug interactions and unwanted side effects.

READ NEXT: The five best glaucoma supplements for your optic nerve